Mirror, mirror on the wall don’t say it ‘cause we know Lizzo cute. And by cute I mean extremely talented, gorgeous and totally inspiring!

A few months ago I was watching The Ellen Degeneres Show when I witnessed one of the most fun, exciting and awe-inspiring performances I’ve ever seen. Lizzo popped onto the screen in a sparkly, pink getup and began singing what would become her big hit song, “Juice,” – I was immediately hooked (more like obsessed). During this performance she also jammed out on her flute alongside her plus-sized backup dancers and suddenly I knew I had been changed forever. I did some more research on the rapper/singer and found out I had been sleeping on this gem! Lizzo has been doing bad all by her damn self for years, having already released two albums in the past. I am suddenly mad at every single person who neglected to tell me to jump on the Lizzo train sooner! If you’re like me and need a bit of catch up, I’m going to break down exactly why you need to know this icon in the making.

You can throw a stone in any direction and hit a triple threat nowadays. Lizzo’s brings talents we have yet to see in the mainstream music industry.

If singing, rapping and dancing make Lizzo a triple threat, what does flute playing making her?!? A STAR THAT’S WHAT! Lizzo has displayed her abilities as a talented flautist, which is not an instrument you would necessarily think of in conjunction with the rap genre making this talent all the more extraordinary. Lizzo even used her flauting skills to compete (and defeat IMO) with Ron Burgundy. Not Will Ferrell, but Ron Burgundy.

Oh, and she can also twerk while playing the flute.

As if playing the flute wasn’t impressive enough, Lizzo can also twerk while playing. I really hope some high school kid is deciding to take band just so he/she can flutwerk their way around campus like their fav flautist, Lizzo.

Lizzo uses her platform to inspire and raise up everyone around her.

Lizzo uses her voice for more than just creating fire music, ya know. She uses her platform to defend the belief that beauty comes in all shapes and sizes. Her Twitter is filled with positivity and strong messages about acceptance.

We cant forget to mention that Lizzo is a straight up beauty queen. She is known to switch up her look but I’ve never seen a bad pic of this queen. To solidify my point, she is now officially the first, plus sized black woman to be featured in Playboy magazine! 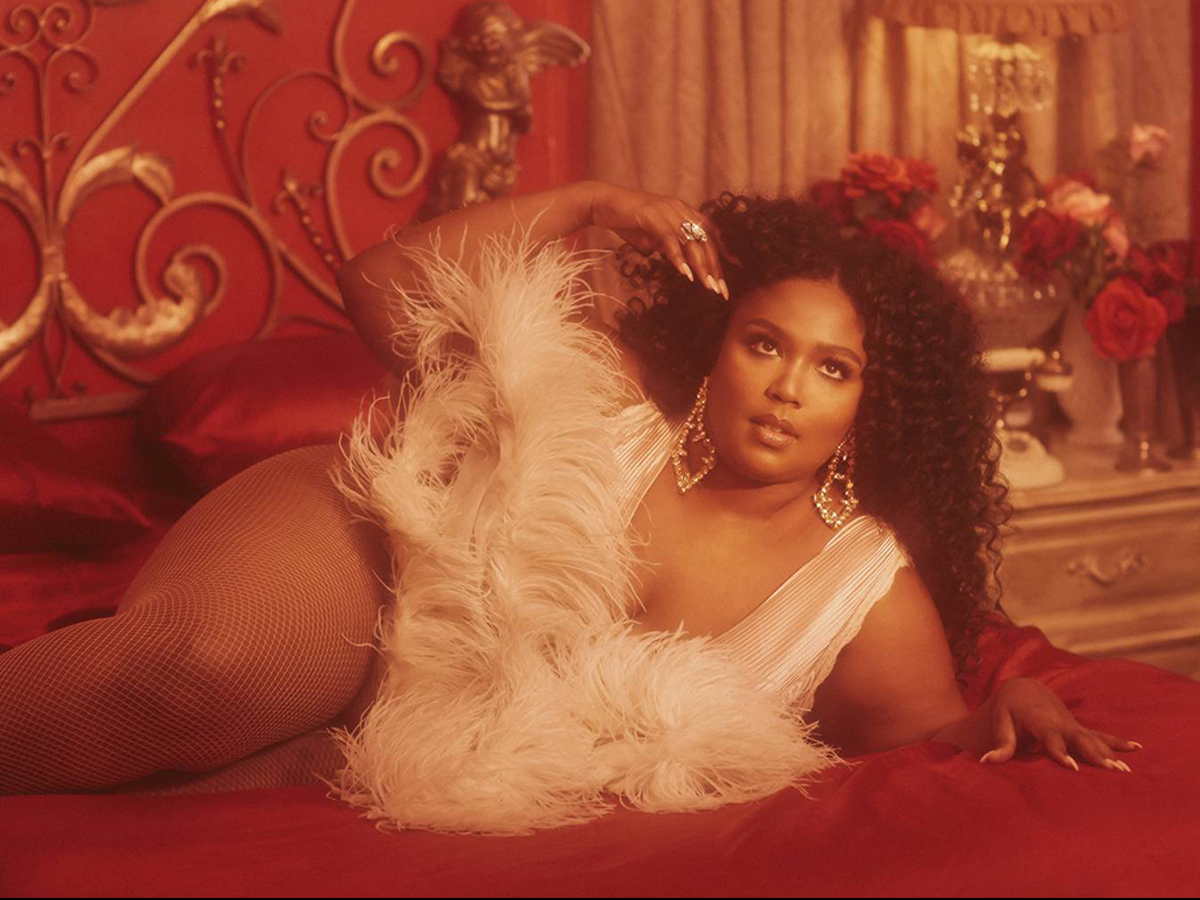 Move over Avenger’s, Lizzo has been in a comic book too!

Ok indulge the nerd in me on this one…Lizzo was even featured in a comic book!!! That’s right, she has become so influential that even Marvel comics wanted a piece of the Lizzo-pie. Check out this shout-out in Unstoppable Wasp #4!

So now that you have become as obsessed as I have, you are probably wondering how you can get even more Lizzo in your life. Well lucky for you, her new album dropped TODAY! Her third studio album, Cuz I Love You, is available anywhere you listen to music and let me tell you, YOU WILL LOVE IT. The album is varied and showcases all of Lizzo’s incredible range with some songs being upbeat and funky, and others being slowed down and heart wrenching. For a taste of what to expect, click below to listen to the title track of the album. If the new album still doesn’t satisfy the hunger for more Lizzo, she’s also on tour! You can click here for more info on tour dates.

Oh Lizzo…you are most definitely 100% that bitch.

Watch Taylor Swift’s Music Video For Her New Single, ME!

LISTEN AND VOTE: Madonna Has A New Single. What Do You Think?

We’re going to be doing some quick video updates whenever we can! Here’s the latest! Justin Bieber begging for streams, (while you can hear him chew – ew), the ladies of Friends reunited, and mother nature. Take a look!

Have you heard? It’s 2020 and we’re all supposed to music videos on TikTok. Courteney Cox is no exception. The TV star posted an instagram of her and her daughter Coco dancing it out, with the hilarious caption, “Wanna see your child lose their patience? Do a TikTok with them.”

Also, how long does it take to actually learn one of these routines? It seems very time consuming.

What I was really hoping for was video of her daughter losing her patience, but what we got was a pretty strong routine!

Wanna see your child lose their patience? Do a TikTok with them. #familyaerobics

Former Law And Order Actress Representing Herself In Court? Diane Neal Claims Her Attorneys In Abuse Case Dropped Her, Leaving Her To Fend For Herself

In an emotional, now deleted instagram post, actress Diane Neal claims her attorneys have dropped her – leaving the actress who once played assistant district attorney Casey Nowak to try her hand at being an attorney in real life.

Neal has been embroiled in a vicious legal battle that has spanned more than two years. It began when Neal filed a lawsuit alleging her ex, magician JB Benn, was a “manipulative and maniacal fraudster,” who had “defrauded her of millions” and “violently inflicted emotional distress,” according to The Daily Beast. She claims Benn subjected her to “a campaign of isolation, terror and (physical and sexual) assault, and destroyed her reputation.” She also claims he once cut her dogs throat. In turn, Benn has a lawsuit against Neal, claiming she owes him money for property they shared, and that she frequently threatened him. Part of his case: a damning recording in which the female voice, which he claims is Neal, threatens him and his dog. Listen to that tape HERE. It’s intense.

The truth is, the story is so full of battling accusations that it’s probably best to read the FULL list chronicled in this Oxygen article.

But today, in an emotional instagram post which she later deleted, (but copies have which have been retained and posted) a dramatic turn. Neal claims her attorneys have dropped her with no warning.

She speaks directly to her camera phone, saying, “So this is my version of hell. And there he is walking right past me right there” she says, referencing a man whose face cannot be seen. “So, I have been put in a situation by my own attorneys who decided to drop me as a client yesterday afternoon with absolutely no warning, wherein I have to represent myself in court. Because this is what happens to victims of abuse. My attorney yesterday accused me of having an inappropriate relation with (unintelligible**), which is not at all even remotely, a thousand times not true. Has done all kinds of things and … saying it was my fault for being abused. So wish me luck. It’s terrifying, but I am doing this for every woman who can’t do it for themselves. I stand for all of us.”

**please note that the words here were difficult to make out. We have our interpretations but don’t want to speculate without confirmation.

It’s unclear what the nature of the current court hearing is intended to cover today.