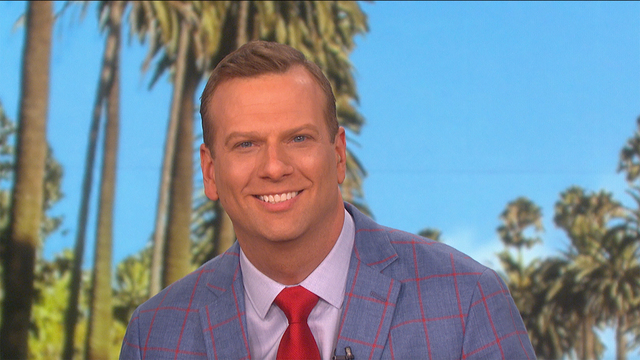 What a thrill to be on a show I’ve watched for years now! The experience was a whirlwind, so much fun, and I can’t wait to stop by again!

Part of the fun of going on a show you’ve never gone on before is that you can never truly don’t know what to expect. I wasn’t nervous about the topic because the producer had me completely clear on what would happen and how it would go down – the unexpected part would be more about what the environment would be like – what the energy would be like, etc.

Most of the talk shows I’ve been on are NYC based, so going to a studio lot in Los Angeles is doubly exciting.  But wait for it – the show is shot on the CBS Studio set where RHODA was once shot! (Okay this is what someone told me, so that’s fact checking enough for me.) So that is insane. So cool. History is really all around you on these sets.

The truth is, I will always be living through these experiences with the same awe of my ten-year-old self – so to be in Hollywood and picked up in a car and driven to a CBS lot to be on a TV show is a dream come true. Beyond. On top of that, every last person on the crew AND the show hosts themselves were truly amazing and kind and helpful.

Cut to being brought to a dressing room with your name on the door. It’s hard not to feel a little thrill seeing that someone goes to that level of trouble to make you feel welcome. Of course, there are plenty of people that are quite used to this sort of thing, but I don’t ever want to get to the point where that doesn’t make me feel special. It does. It’s a thrill.

From there I was briefed by the producer and greeted by all the people I would be meeting along the way. Sound and tech people, an amazing ,makeup artist who expertly hid my really blotchy skin, including a light bruise I had gotten on my cheek earlier in the week. (From my MMA training naturally.  😉  …kidding.)

From there, a short walk to the studio and I’m placed on the set. Seated between Sara Gilbert and Sharon Osbourne, we have about a minute or two before the segment as we’re in a commercial break. I made small talk (think, Brian think of something short and no stupid to say!) I mentioned to Sara that I am really hoping that the Roseanne reboot was going to come back. She made a ‘we’ll see’ expression and said ‘we’ll find out tomorrow.’ Sure enough, the next day it was announced that the show was coming back. So she clearly knew that, and was sweet for giving me the clue! Sharon was lovely and I spoke to her about the times I have met her son while collaborating with her production company on some things. Sheryl, Aisha and Julie were all lovely. And then came the segment. Fast and fun. The audience was great and enthusiastic, the lighting in that place is amazing, (Can I take all my selfies there?) And I got to take a quick pic with the cast, thanks to the EP John. He and I have so many colleagues and friends in common I feel like I’ve known him about twenty years.

The whole team was great, the morning was hugely fun, and then I was on my way! I hope to go back again.

By the way – check out more POP Culture, Food, and Entertainment on POPGOESTHEWEEK.com!

Watch Me Play “On This Day” With Kathie Lee and Hoda!

WATCH: Why Melissa McCarthy Has Us PUMPED For SNL This Week

UPDATE: T’Challa Has Found His Way Back To Bird-Mom Monique Samuels!

Call off the perch and rescue.

Earlier today, we reported that T’Challa, the African Grey parrot belonging to Monique Samuels of Real Housewives Of Potomac fame, had gone missing. After flying off yesterday morning the Potomac pet has finally made his way back to Monique’s backyard. In a series of videos posted to Instagram just two hours agp, Monique shared that T’Challa flew into the yard and perched himself onto a chair. The housewife admitted that her bird looked like he had his feathers ruffled last night but shared that he was so happy to be home he allowed Monique to hug him.

We love a happy ending!

Sure, we all tilted our heads and raised an eyebrow when Real Housewives of Potomac star Monique Samuels leashed up her African Grey parrot and took him to lunch at cast mate Karen Huger’s house but there is no denying that the football wife loves her bird as much as any dog owner would their pup. So you can only imagine how devastated Monique must be now that T’Challa has gone missing!

On Sunday, Monique took to Instagram to share the heartbreaking news that during her morning coffee in the yard her bird, with the Black Panther namesake, had gotten spooked and flew off. In the 8 minute video, the reality star shared her fears that since T’Challa is not an experienced flyer he may injure himself or get stuck in a tree with no way of coming down. Monique shared that her husband, Chris Samuels, took care of their children all day so she could hit the streets to pass out flyers and search for the bird.

While recapping the second episode of season 5 which aired Sunday night, Monique also gave a T’Challa-update in which she thanked her fans for their outpouring support but sadly reported that the parrot is missing. The good news is that T’Challa is microchipped so if someone else should find him and take him to an animal rescue, Monique will be notified.