Emmy watchers got a peek of Lindsay Lohan as Liz Taylor in the upcoming Lifetime movie “Liz And Dick.”  They’ve also  launched their homepage for the film, which premieres in November. (She looks more like Liz on the website than in the video.)

But more importantly, the preview … It’s hard not to think about Lindsay Lohan instead of Liz Taylor while watching it.

Check Out Your Complete List of 2012 Primetime Emmy Winners!

To Finish Out Her Horrible Week, Amanda Bynes Is Dropped By All Representation And Charged With Driving With A Suspended License! 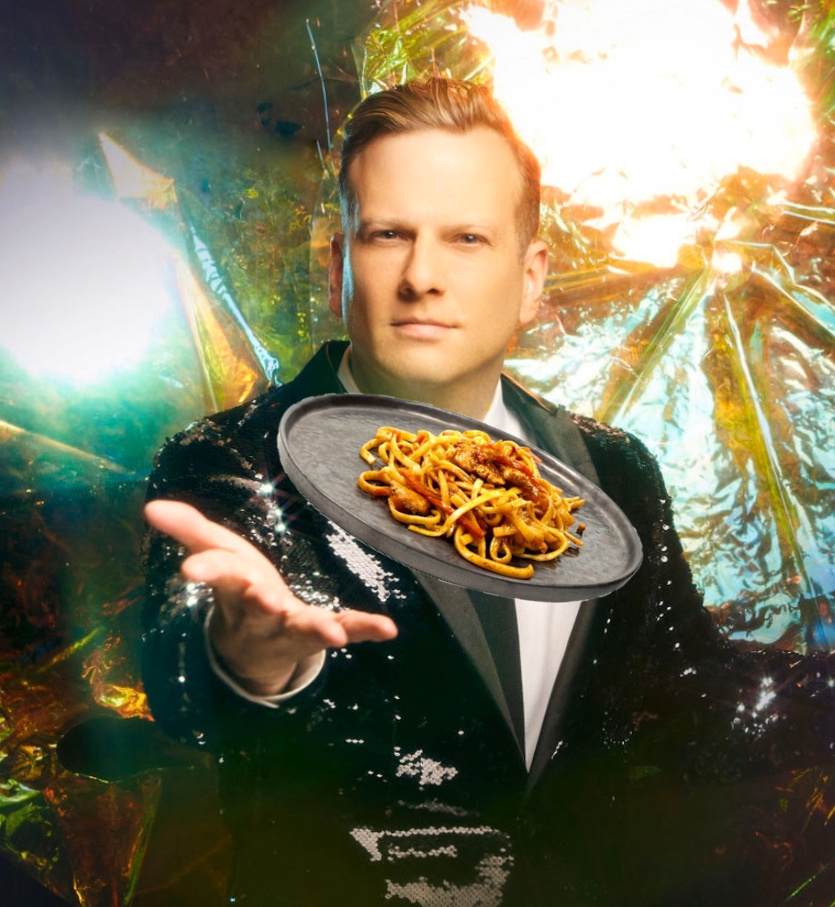 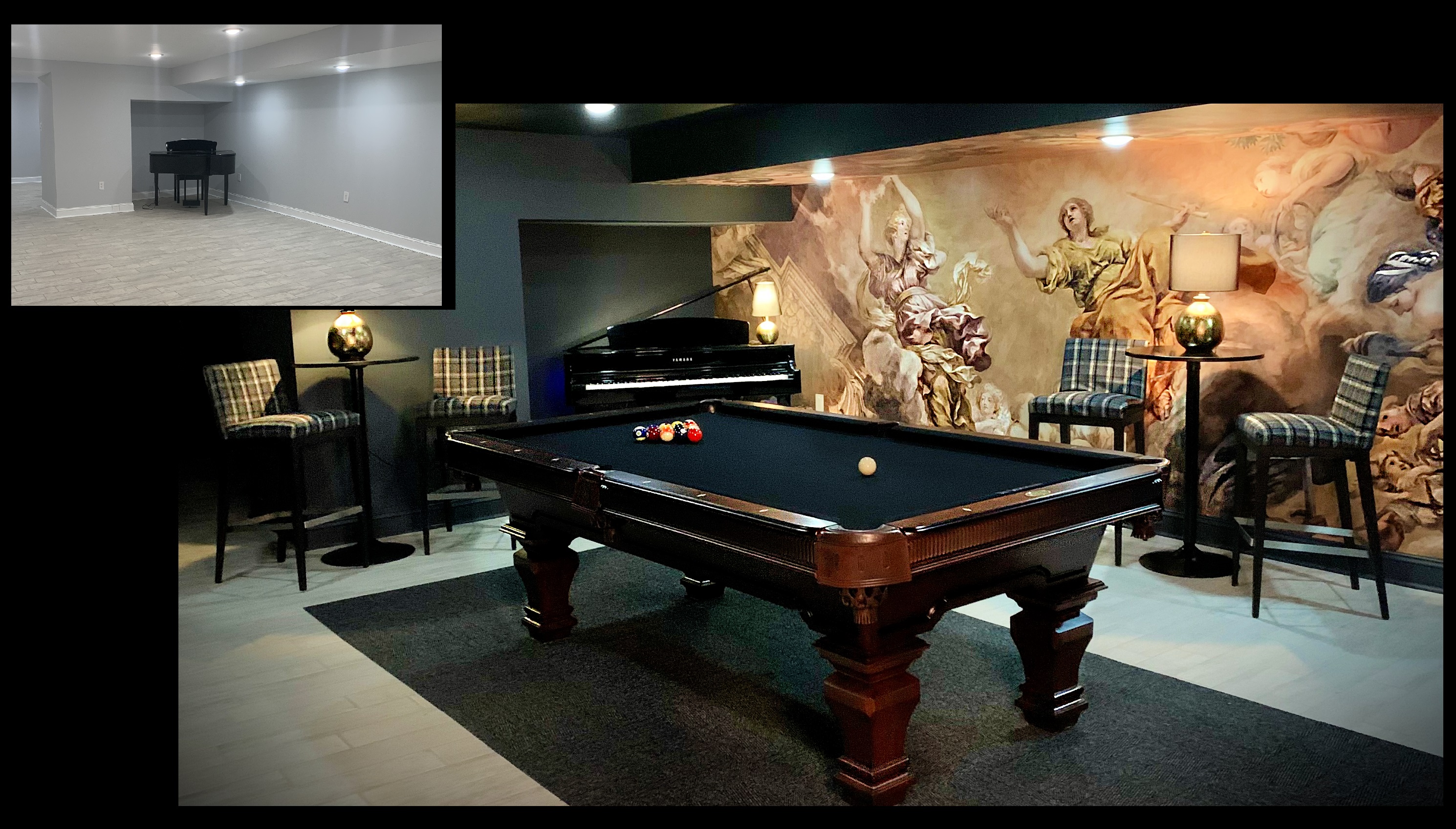 As the world was forced to spend more time at home, Brian Balthazar found himself in a position where he had sold a house before the lockdown and had to find a new one.

“We sold our home with all the furniture in it, so not only did we find ourselves struggling to find a new place, once we found one we didn’t have any furniture to put in it.”

And so, Brian and partner Dennis got resourceful, turning to refurbishing and buying store floor models. They were inspired to make bold, fun choices in color and style when they started shopping around for wallpaper.

Below is the segment as it appeared on the Today Show, and further down, a rundown of where you can find the pieces or ones with a similar look!

Let’s start with the Dining Room!

Move the slider dividing the image to see all of the before or all of the after! 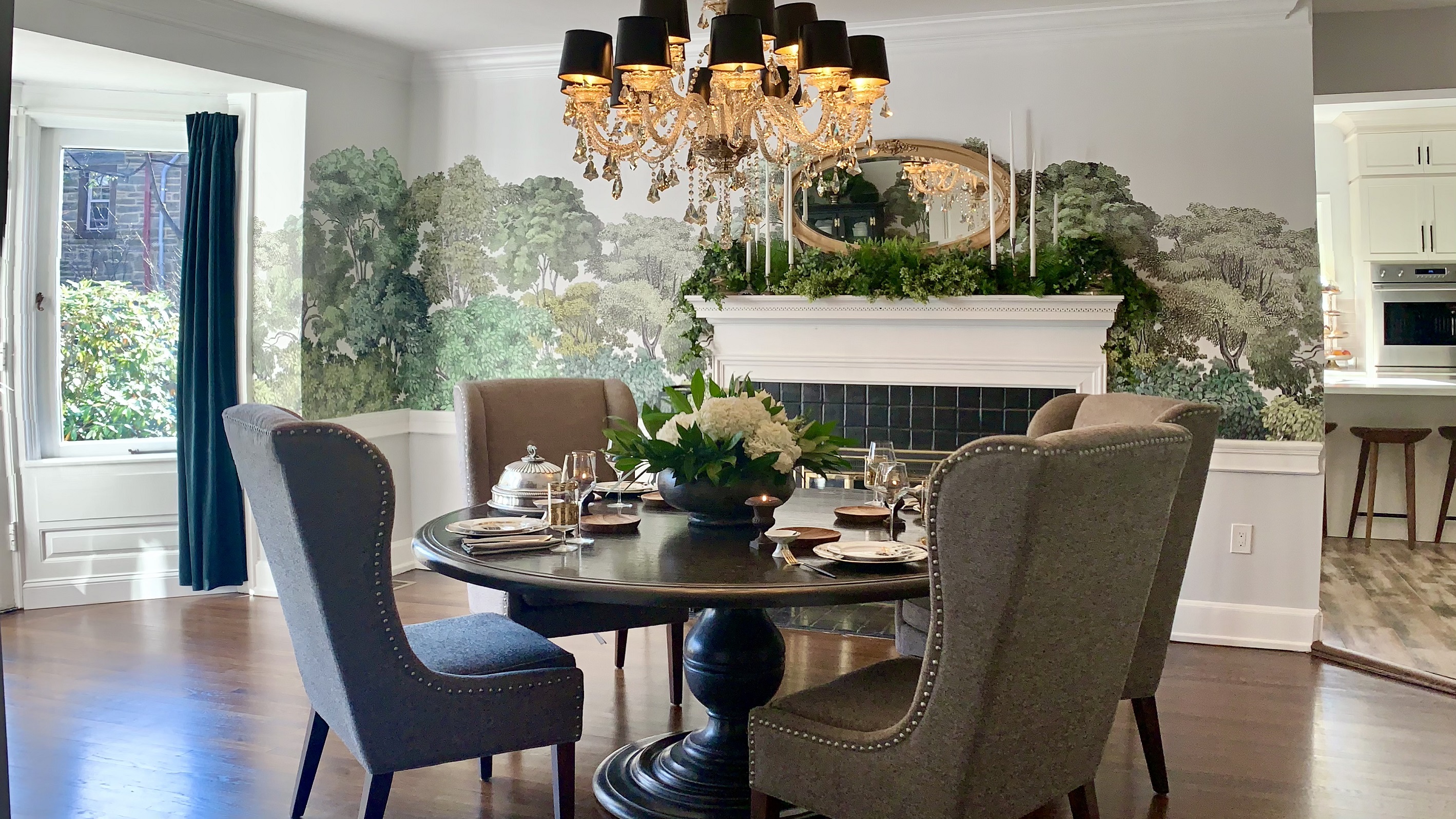 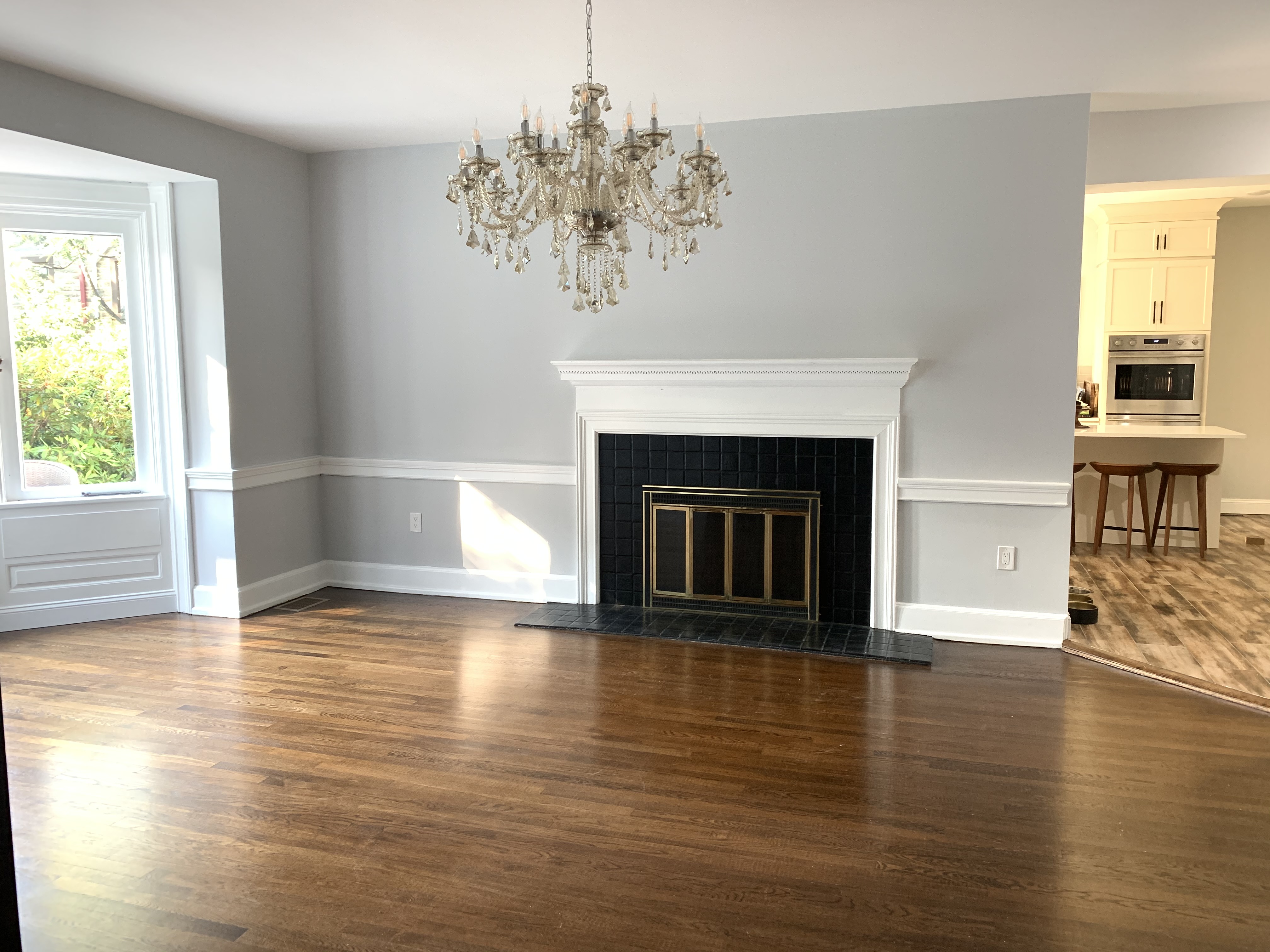 Brian says: The dining room was the first space we wanted to do. I haven’t had a true dining room since I was a kid, and I’ve always wanted a big table for dinner parties! There were no tables within the price range we wanted, so we found a floor model at one of our favorite go-to stores, Arhaus. We easily saved 75 percent on this table by getting the one that they weren’t going to carry anymore. The chairs are from Wayfair.  On each side of the fireplace (not seen in the photo, but visible in the Today Show video) are two black tall lanterns flanking the fireplace. I got them at Target. I can’t currently find them on their app, but similar versions pop up every year. Get thee to Homegoods! Homegoods and Homesense (same parent company) are my go-to spots for home accessories for virtually every room in the house. You never know what you’re going to find, which is part of the fun. 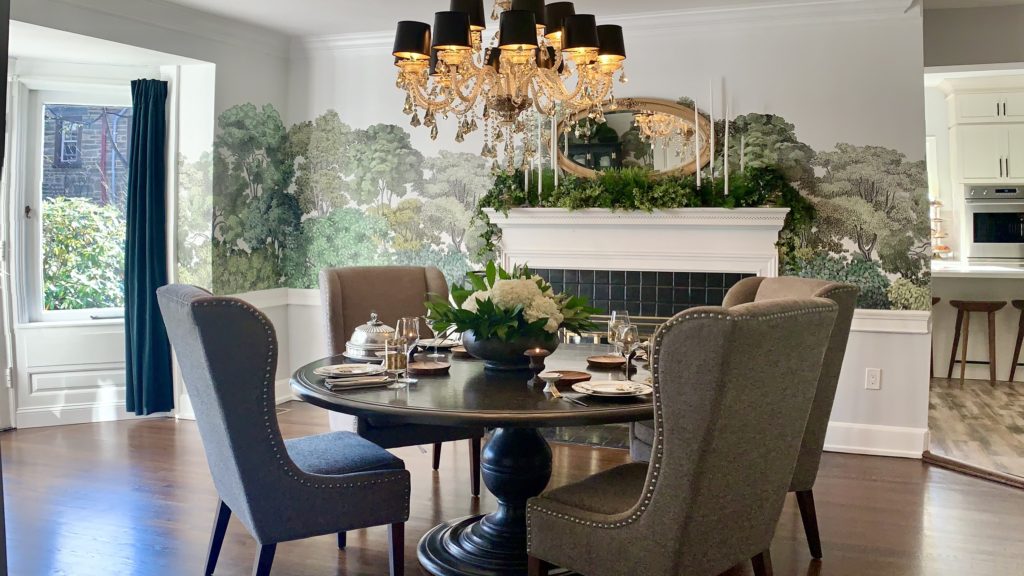 But let’s focus on the real WOW element to this room – the wallpaper! This pattern is called Bellewood, by RebelWalls.   As you will soon see, I’m sort of obsessed with their patterns. To me, this room is magical with the added whimsy of this forest pattern. (They also have a more muted version with grays and even one with blues.) I also love that by hanging the paper from the chair rail up, you almost get the feeling that you’re standing on a balcony overlooking the forest. I surrounded the whole room with this paper, which I love, but you could easily add the same magical feeling by just doing one feature wall. Their website shows how it can translate to a bedroom or office. You might be intimidated by hanging wallpaper but don’t be! This pattern has so much going on that it really looks perfect when it goes up!

ON TO THE GUEST BEDROOM! 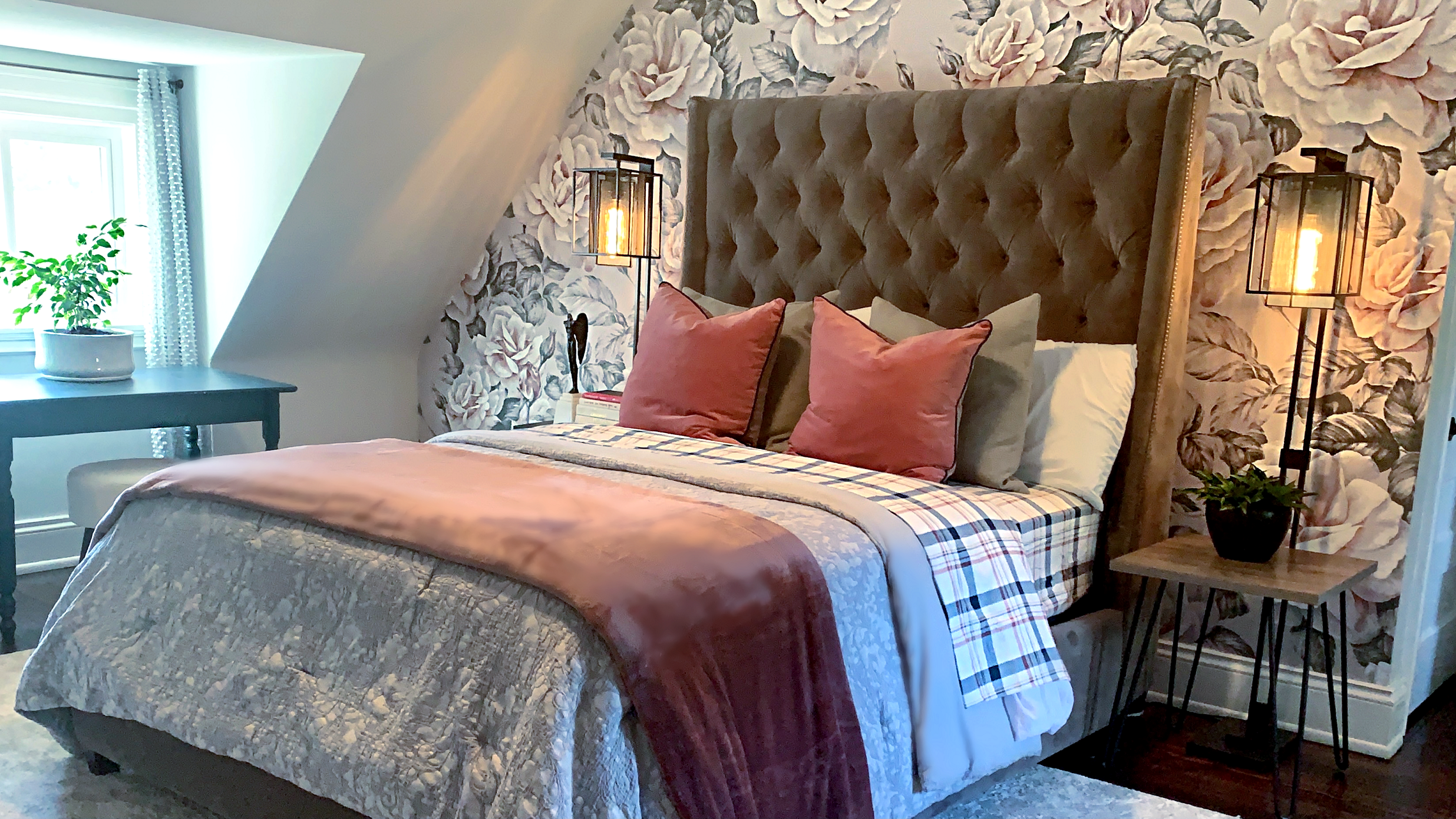 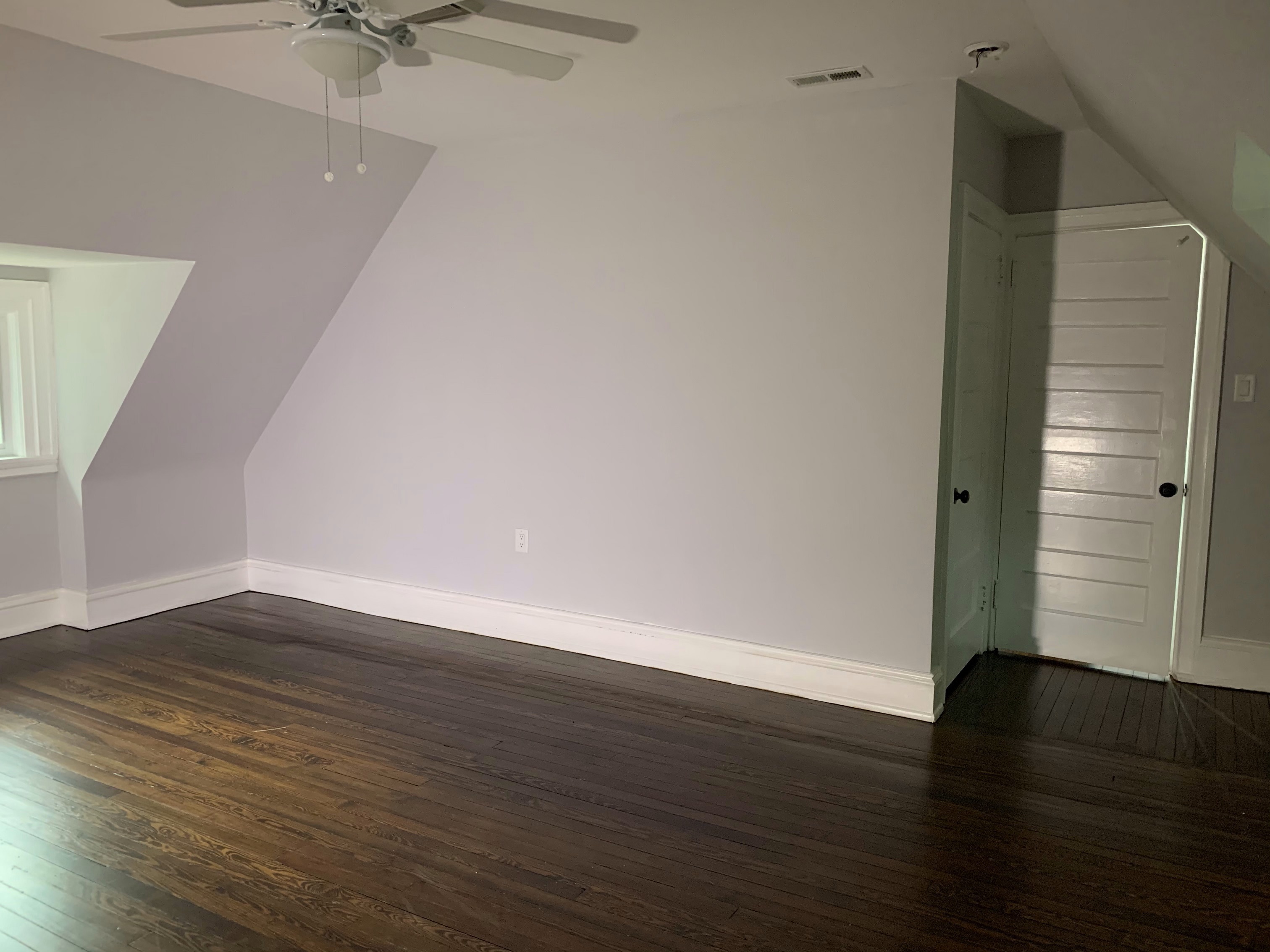 Brian says: The guest bedroom is on the top floor of the house, so it’s got roof lines on two sides that make it a tricky space to navigate if you’re not careful. The planning of this space alone resulted in a few bonked heads. On the upside, the wall where the bed goes is tall, so it was an obvious place to create some visual pop. Again, the wallpaper takes the spotlight.  Called “Nude Roses,” also by RebelWalls, I love this design. Floral wallpaper was ‘big’ in popularity back in the 1920s when this house was built, but the patterns at that time were smaller, repeated more often, and were often really bold in color. This interpretation is so fun to me! Gone are the small roses in favor of oversized blooms, and the bold colors are more subdued pink and gray hues, with touches of dark green and creamy whites. 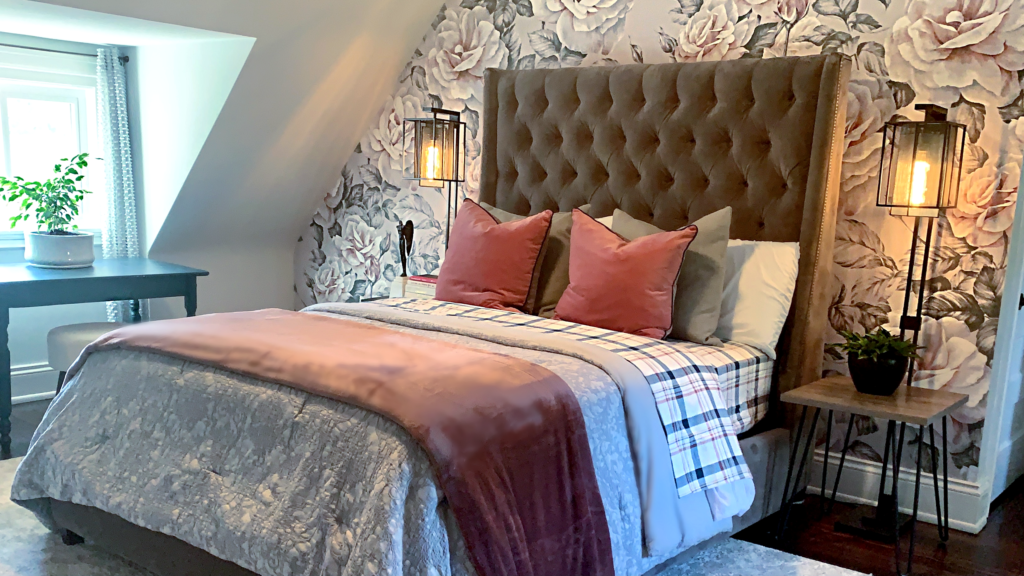 While roses can inherently feel feminine, the plaid bedding (30 dollars for a queen set from Target) are a surprising complement that keeps everything from feeling a little stereotypical. The side tables are mismatched – partly because we didn’t want to go too “matchy=matchy” – but also to save some money – the one on the left side (hard to catch here) was from West Elm. Normally $199, we got it for half off as the floor model. The one on the right we found in the trash. It was perfectly fine, clearly someone had just gotten tired of it! Nothing some disinfectant can’t fix. That gave us some extra money to spend – To reduce the softeness we went with industrial lamps and edison bulbs. The lamps  are called “Ginyard,” from Wayfair. The headboard was on sale at Arhaus. The dark gray takes balances out the pink hues well. The pillows are from Target and Homegoods.

For the 360 degree view of this room, watch the Instagram reel below!  You’ll see the dresser, on sale for $599 from Arhaus, a lamp from Homegoods, and mobiles from Amazon which we fashioned into a ‘piece of art’ that keeps you from hitting your head on the angled wall opposite the bed. Watch the video to check it out! 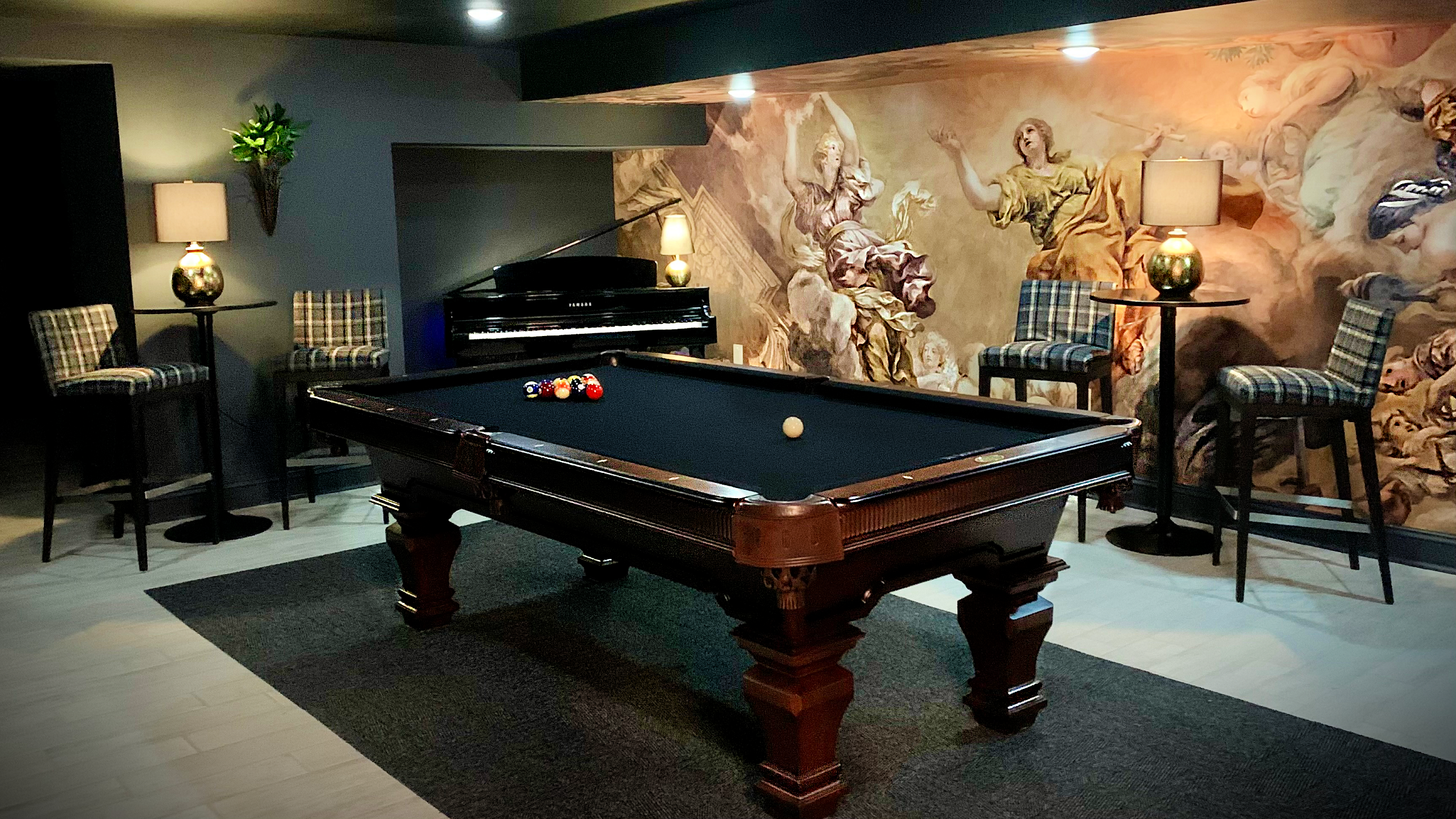 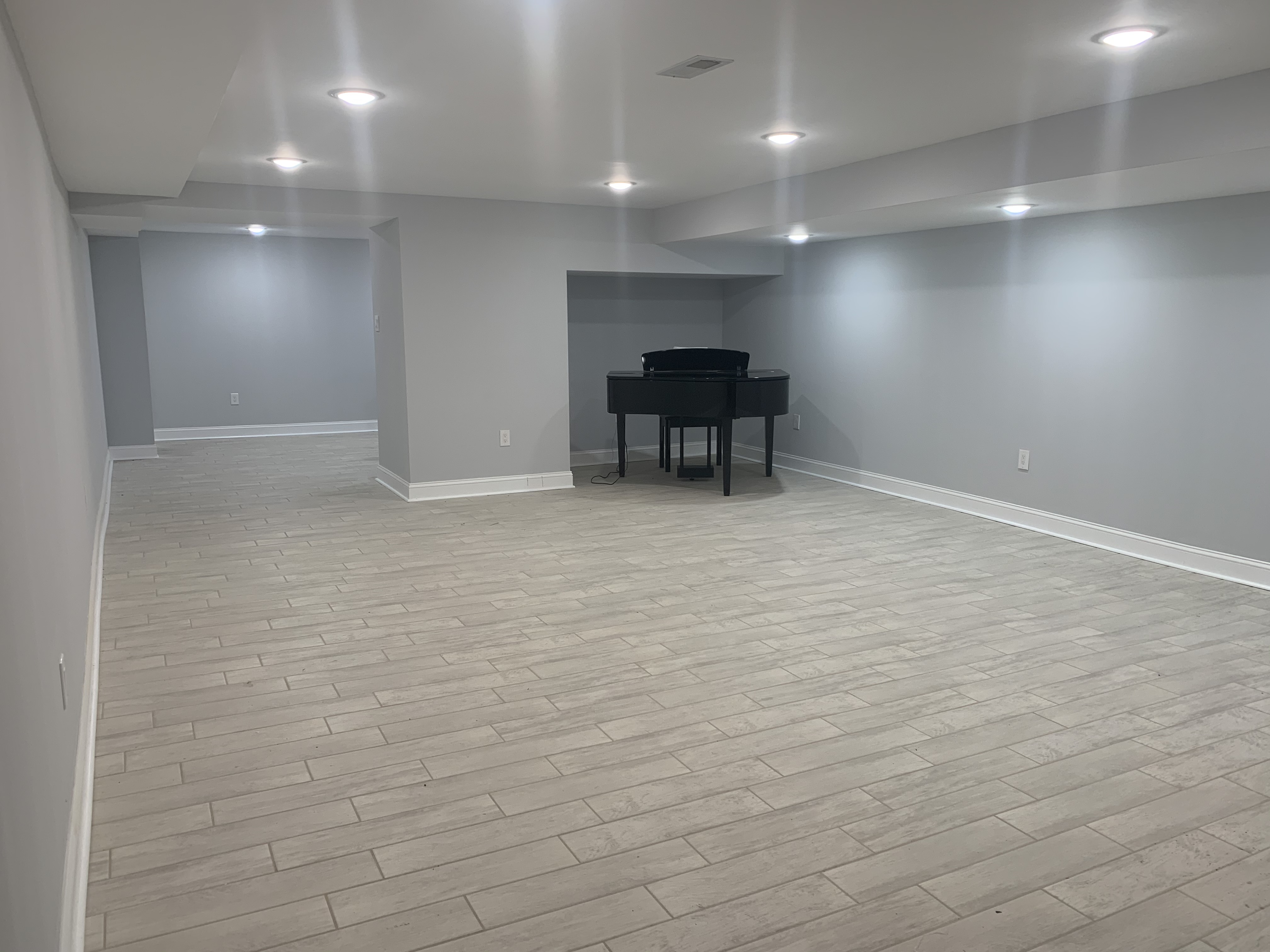 Brian says: The idea for the basement game room was to create a space that feels like a lounge you might find if you went out with friends. When you go into this basement it definitely feels like you’ve gone someplace unique! Believe it or not, I found out the Today Show had invited me to to record my house tour just a few days in advance, and so we turned around this spot in just THREE days! There was literally no pool table at the time, (although it had already been scheduled to come on Friday, the wallpaper came on Saturday, (as well as the floor tiles!) and by Sunday we were covered in paint and glue and drinking wine to celebrate it’s completion! I recorded the final video that Monday. 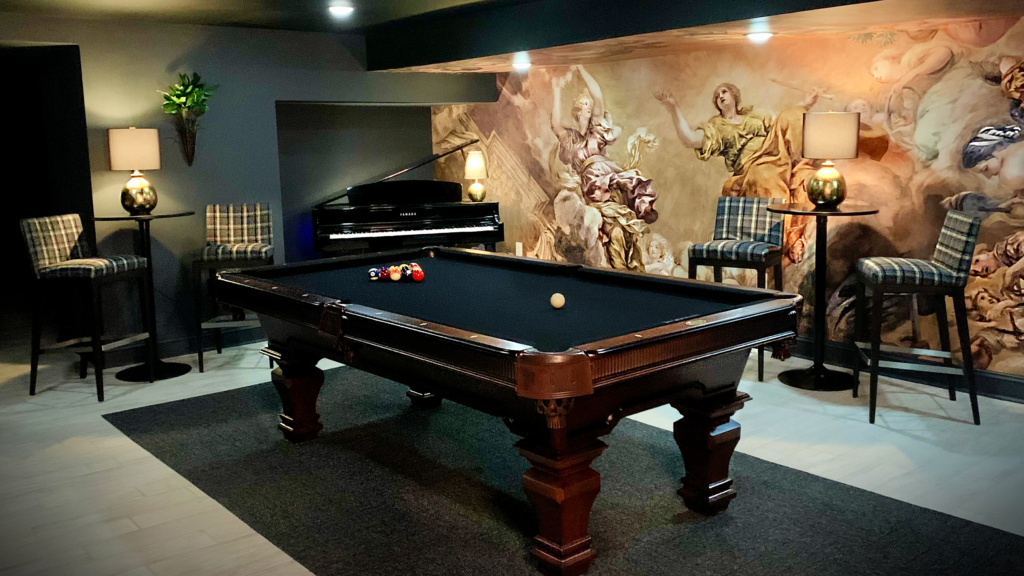 Some people might not think to take a bright basement and make it dark, but that was our first instinct. Clubs are dark and moody, and we wanted this to feel like that. We painted the walls Wrought Iron by Benjamin Moore, which is a very dark gray that seems to take on different hues based on where you paint it and the light that shines on it. We painted the ceiling black. This was Thursday night! Then Friday the pool table came. The floor tiles (“Tweed Indeed” in black by Flor) hadn’t arrived until the next day, so when they did arrive I meticulously trimmed four tiles to fit around the pool table legs so it looks like they were there the whole time. I had ordered the pool table online weeks before from PoolTables.com and by sheer coincidence it was scheduled to arrive in time for me to shoot the redesign. This was the second time I have ordered a pool table from them (which was initially scary because you’re not even seeing it beforehand!) but it always arrives in perfect condition to your specific selections. I love that the felt jet black and keeps things dark and moody. In the time that has passed since this photo was taken, I’ve added more of the carpet tiles to make the carpeted floor area darker and bigger.

But once again, the wall mural steals the show in a marvelous way! This mural is called “A Priori” from Rebelwalls, and is inspired by The Allegory of Divine Providence and Barberini Power, a famous fresco by Italian artist Pietro da Cortona. Fitting, because this house is Italian in style on the outside. You can’t see it from this photo but the wallpaper runs up part of the ceiling as well. It truly gives the room a wow factor when you enter it. The lamps are from Homegoods, (we’ve since added some industrial floor lamps for extra mood lighting) and the piano was something we brought with us. The bar tables are from Amazon ($72 each) and the stools we brought with us – they were discards from someone who didn’t like their original bright colors and thought they were dated! We covered them ourselves with gray plaid fabric and they’re better than they were new!

So there you have it! Hope you enjoyed the rooms and find something you like!