Over the last few days I noticed the word “Djungelskog” trending on social media. After resolving that the word was not simply the result of someone mashing a bunch of random letters on a keyboard, I decided to see what d-heck a “Djungelskog” was. I should have known that with a name that consonant heavy it had to come from IKEA. So without further ado, allow me to introduce you to the item on everyone’s shopping list, the “Djungelskog!” 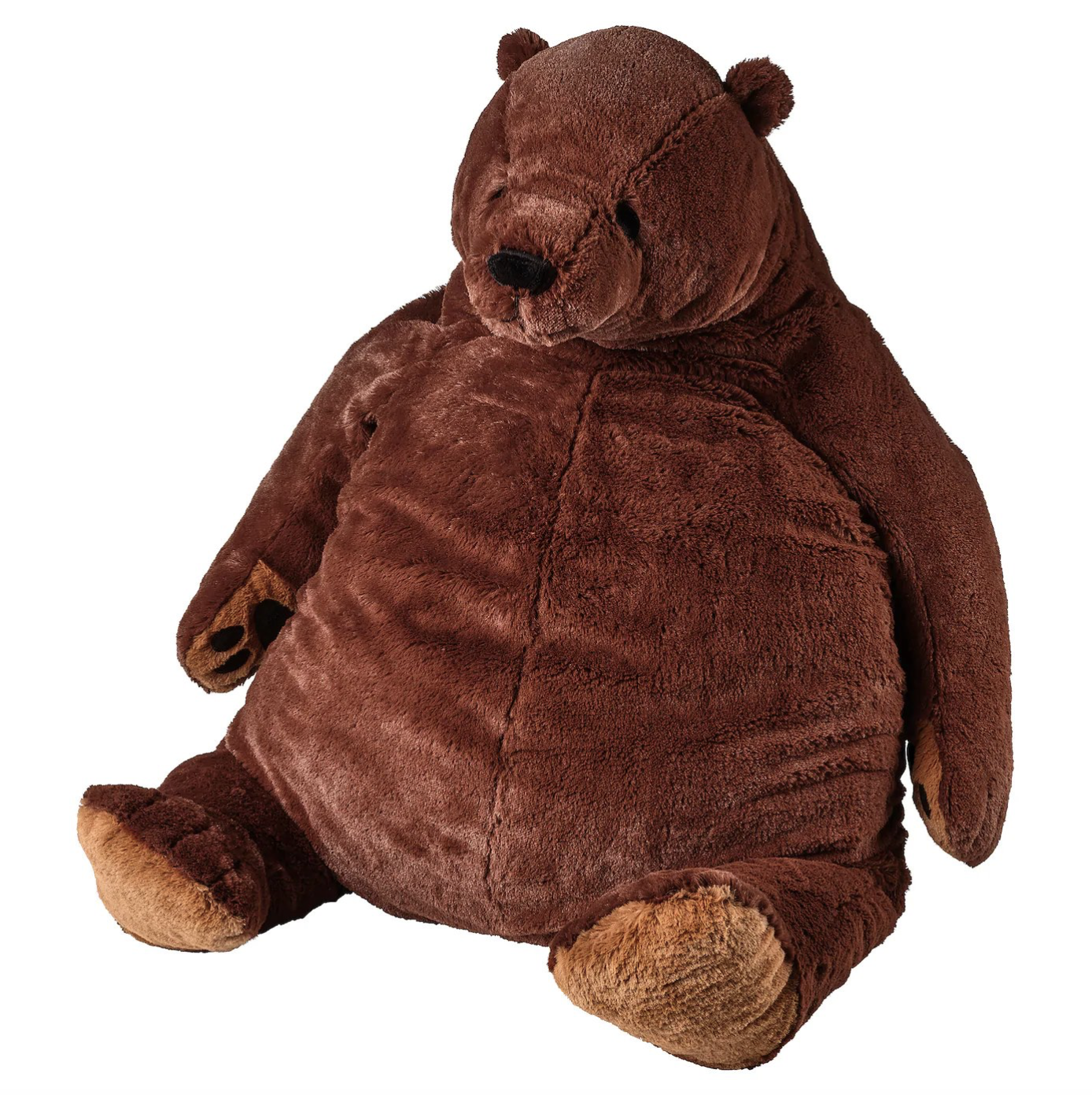 Step aside Swedish meatballs, there is a new star in stad (town). Social media has gone crazy with adoration for the giant stuffed bear…probably because it’s the one thing the giant retailer sells that doesn’t require some assembly. People from around the world have been sharing hilarious posts about the “Djungelskog,” which according to Google Translate literally means “forest jungle.” I guess they were worried that the actual Swedish word for bear, “björn,” would be too hard to pronounce…

Am I feeling miserable or do I just need a djungelskog?

how am i supposed to feel pretty when djungelskog exists pic.twitter.com/bTJcefLUov

why is the djungelskog bear not available in the us? what is ikea afraid of? perhaps his towering 3'3" stature and immense strength within his plush being are too powerful for us weak americans. give us djungelskog bear. pic.twitter.com/M5Nc5JJ0eo

The bad news is the brown bear version of the “Djungelskog” is not available here in the U.S. But that doesn’t mean we are to be left out of the movement. If you type in “djungelskog” in the search bar on IKEA’s U.S. website, which I can spell perfectly now that I have used it about 100 times while writing this, you will be brought to a page for an 18.5 inch stuffed Panda. Not quite as impressive as the 3 foot bears overseas but a solid second choice none the less. To purchase the panda version, click here.

This is just the news I needed to investigate today to make this week more bear-able…don’t hate me.

She dances and everyone is watching.

You know you’re in the presence of greatness when someone’s Twitter bio mentions they “drink Malibu” and they “just want to make people smile!!” Well the internet’s newest, viral sensation Tammy Ortery could not have more greatness even if she tried as proven by the millions of views her dancing videos have garnered.

Talking with Hello50 Tammy spoke about how her journey to viral stardom began. “My daughter and I danced in a video, and my daughter’s friend said your mom should go on Tik Tok.  A month later, it took off.” And took off it did! Tammy’s videos have garnered attention from viewers from all around the world with fans sharing the love from as far as Germany and Bangladesh. As if that isn’t impressive enough Janet Jackson…Ms. Jackson if you’re nasty…has shared one of Tammy’s videos on Instagram AND Miley Cyrus and boyfriend Cody Simpson even recreated one of her dances!

Tammy’s videos are exactly what we all need right now. Just pure joy, fun and a reminder that we should all dance like nobody’s watching…even if everyone is watching!

A lot of casts have been virtually reuniting during this quarantine with some distant gatherings more memorable than others. Of course, anytime the ladies of Pitch Perfect get together it’s a singing spectacular that goes viral almost instantly and this time is no different.

Elizabeth Banks and John Michael Higgins reprised their roles as the hostile hosts of the a cappella singing competitions, Gail Abernathy-McKadden-Feinberg and John Smith respectively, as they introduced the Barden Bellas. The powerhouse singers including Anna Kendrick, Rebel Wilson, Anna Camp, Brittany Snow, Hailee Steinfeld, Chrissie Fit, and Hannah Mae Lee then crush their rendition of Beyoncé’s “Love On Top.” And you know if you’re going to cover Queen Bey it better be good. Oh and streaming the song will not only sound good but it will some good too because proceeds from downloads of the cover will benefit UNICEF’s efforts to support children in Lebanon and around the world who have been affected by the COVID-19 pandemic. Aca-amazing!

A gay couple in Chicago became victims of theft when some jerk took the Pride flag from their porch. Rather than admit defeat, the adorable couple decided to fight back in the most hilarious way possible…buy and display more like flags…like a lot more!

Taking to TikTok to share their story, the couple begins by addressing “the person who stole the Pride flag off our front porch,” then satirically apologizing with “we’re so sorry a rainbow bruised your fragile ego.” The couple reassures the thief that there will be plenty more flags to come because they have “next-day Amazon prime.” The video goes on to show all the ways the new flags will be displayed on the front porch…including the magic trick in which one of the boyfriends pulls a never ending rainbow handkerchief from his mouth!

The whole video is brilliant and a great reiteration that we should never be ashamed of who we are. In fact, we should embrace it! The video ends with the gentle reminder that “you can keep taking our flag but you can never take our pride.” Amen to that!

You can take our flag but you can never take our pride. #gay #pride pic.twitter.com/7nz2ZSJGE7