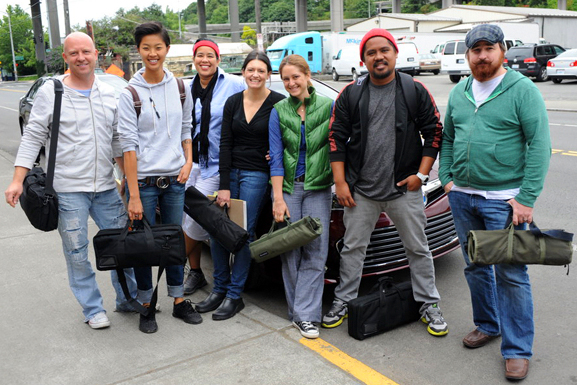 This week is a continuation of Restaurant Wars! If you’re not familiar with this Top Chef staple, here’s how it works (at least this season): the remaining cheftestants are split into two groups and are given the opportunity to open and operate their very own restaurant for one night. The winners from last week, Sheldon and Kristen, are the leaders of their respective teams. The leader of the winning team gets a Toyota Avalon.

The stakes are set pretty high from the start. Not only are the chefs competing for a car, but they’re also serving Danny Meyer, big time CEO of the Union Square Hospitality Group. This guy owns like a majillion restaurants.

The teams are split boys vs. girls in a battle of the sexes. Since 7 chefs remain, the advantage goes to the ladies:

Sheldon’s Filipino heritage plays a big part in his vision for the restaurant, which is a risky play since neither Stefan nor Josh is familiar with this type of cuisine.

The girls seem to have the advantage at this stage of the game not only because they have an extra member, but since they all at one point have been classically trained by French chefs.

The guys seem to be running like a well-oiled machine. The girls on the other hand, not so much. Josie was supposed to start on her bouillabaisse, but instead she decides last-minute to do everything on the day of the competition. Kristen even says she would prefer a dishwasher in place of Josie at this point, and I don’t blame her.

On the day of the actual restaurant opening we learn a cut little nugget about Sheldon. He actually started off as a dishwasher and eventually moved up the chain. I love stories like this.

Stefan and Brooke take on the role of “Front of House” for their respective teams. When the guests start coming in it’s like high-octane energy! Brooke has no problem marinating the flow, but Stefan runs into a few hiccups. Probably his biggest offense is that ne never even introduced Josh’s dish when it was served to the judges! This is a major faux pas in this competition.

This isn’t to say that the ladies don’t run into their own troubles. There is a major clash in the kitchen between Kristen and Josie over her bouillabaisse which just isn’t coming together as Kristen originally concepted.

All-in-all here is what the chefs created and are ultimately responsible for:

Stefan: Kiawen (yellowtail with cilantro spicy chili and white) and a chocolate course

The boys win despite Stefano getting slammed for his poor service.

When Kristen and Josie are questioned about the flaws of the bouillabaisse, Kristen does nothing to stand up for herself and essentially falls on her sword in lacking to do so. As a result Kristen goes home. I’m literally floored. However, Josie seems to be the most surprised out of everyone. Ugh, we have to bear another week listening to that screaming man voice.

Not surprisingly, Stefan plants his signature pervy kiss on Kristen’s cheek as be bid her adieu.

But this isn’t the last of Kristen. She still has a chance at redemption in Last Chance Kitchen. Can she beat CJ who is on fire with 6 wins in a row? Tune in to find out.

Content and/or other value provided by our partner, Bravo.

Related Topics:BravorecapTop Chef
Up Next

UPDATE: T’Challa Has Found His Way Back To Bird-Mom Monique Samuels!

Call off the perch and rescue.

Earlier today, we reported that T’Challa, the African Grey parrot belonging to Monique Samuels of Real Housewives Of Potomac fame, had gone missing. After flying off yesterday morning the Potomac pet has finally made his way back to Monique’s backyard. In a series of videos posted to Instagram just two hours agp, Monique shared that T’Challa flew into the yard and perched himself onto a chair. The housewife admitted that her bird looked like he had his feathers ruffled last night but shared that he was so happy to be home he allowed Monique to hug him.

We love a happy ending!

Sure, we all tilted our heads and raised an eyebrow when Real Housewives of Potomac star Monique Samuels leashed up her African Grey parrot and took him to lunch at cast mate Karen Huger’s house but there is no denying that the football wife loves her bird as much as any dog owner would their pup. So you can only imagine how devastated Monique must be now that T’Challa has gone missing!

On Sunday, Monique took to Instagram to share the heartbreaking news that during her morning coffee in the yard her bird, with the Black Panther namesake, had gotten spooked and flew off. In the 8 minute video, the reality star shared her fears that since T’Challa is not an experienced flyer he may injure himself or get stuck in a tree with no way of coming down. Monique shared that her husband, Chris Samuels, took care of their children all day so she could hit the streets to pass out flyers and search for the bird.

While recapping the second episode of season 5 which aired Sunday night, Monique also gave a T’Challa-update in which she thanked her fans for their outpouring support but sadly reported that the parrot is missing. The good news is that T’Challa is microchipped so if someone else should find him and take him to an animal rescue, Monique will be notified.