Even the pro’s have bad days.

Skateboarding legend Tony Hawk took a bit of a tumble on Saturday and the half-pipe wasn’t the only thing left shredded. Something went wrong while attempting to do a “backside smith stall as a set up for a backside blunt” and Hawk ended up on his back with his fingers bending in ways they were never intended to be bent. When he arrived at the hospital, a nurse told the skateboarding pro that all circulation to his fingers had been lost. The injury was so bad that they had to cut off his wedding ring before resetting his fingers…and after watching all 16 seasons of Grey’s Anatomy I know how painful that can be. You can see just how bad the injuries were from the x-ray Hawk shared on social media.

According to LADbible, Hawk thinks he may have been “too cavalier” with his approach and should have been more a bit more prepared. “In that moment, I regretted not wearing full pads. Ironically, that wouldn’t have saved me from injury but I was being too cavalier to think that a wall over 8′ with vert was as ‘safe’ as a mini-ramp,” he said. Unfortunately I think he was right about the pads because all the protective gear in the world probably wouldn’t have prevented his fingers from looking like this… 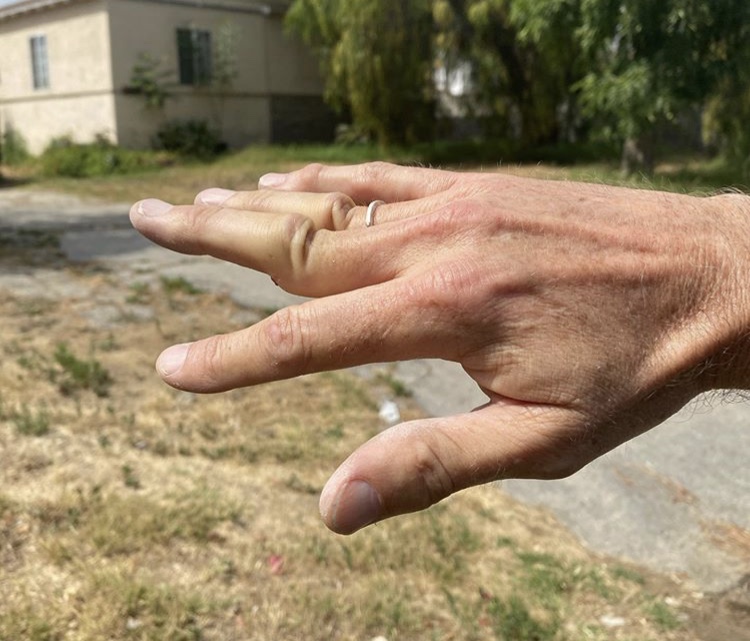 The athletic legend says the injury has brought up some mixed feelings but none strong enough to keep him from the sport he loves. “”I am filled with divergent emotions: sadness from scaring my son & friends, regret from being cocky/careless, grateful from having an injury that could have been worse, and frustrated that I never got a backside blunt… as my skater ego endures. As pro skaters, we accept that injuries are inevitable and perseverance is key to success. But it still sucks to get hurt, especially at my age. And I’ll still be back for more.”

My summary of 2020 (so far): a middle finger, but make it dislocated.
Thanks to Dr. Cho for putting it back where it belongs. Here’s to more healing for everyone in the other half. pic.twitter.com/EMyzbvVCLU

Not really sure how to end this as positively as Hawk has on his social media so I guess I’ll just leave it with this…”always wear a helmet”?